A Comprehensive Guide to Manufacturing in India

Manufacturing presents itself with the opportunity of providing large-scale employment. This enables economic growth and thus,  the Indian government has actively adopted ‘Make in India’ as a core policy. It’s an initiative to encourage and accelerate the growth of the country’s manufacturing sector.

India as a Manufacturing Hub

To date, the Indian government has taken several initiatives and launched various programs to promote the growth of the manufacturing sector. Some of these initiatives are listed below:

The above initiatives are only inclusive and not limited to the ongoing programs that are launched or initiated by the government of India. It is estimated that the manufacturing sector of India has the potential to reach US$ 1 trillion by 2025. In addition, the GST (Goods and Services Tax) implementation has made India a common market with a GDP of US$ 2.5 trillion.

Focus on the Plastics Industry

Injection molding is a common plastic manufacturing process. It is an efficient manufacturing process that can produce high volumes of identical plastic parts. It can be applied to an array of industries such as electrical, medical, automotive, construction, packaging, and more. 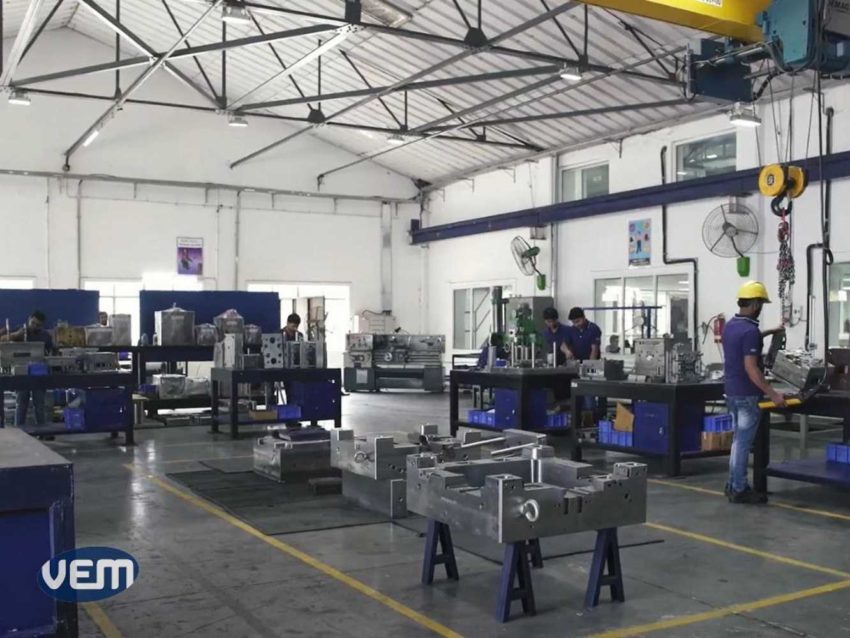 The injection molding industry has risen exponentially over the past 2 decades across the globe and in India, this industry has bloomed such that India is now considered to be one of the global leaders in plastic manufacturing. In this article, we have enlisted every detail that you need to know about manufacturing in India.

Why Should You Manufacture in India?

There are 3 major perks to manufacturing in India. There are listed below:

If you manufacture globally and are now, considering manufacturing in India, here are some advantages that you should know about:

Advantages of Manufacturing in India

Manufacturing in India is not only a cost-effective option but is also one of the most viable options as it poses various advantages. Let’s take a look at these advantages:

One of the major advantages of manufacturing in India is that you don’t have to worry about finding qualified, skillful engineers. Not only the engineers in India are skilled but they are also aptly qualified for designing and manufacturing your product.

India, being an English-speaking country eliminates the barrier of language thus, there is no communication error while manufacturing your product.

Indian factories are focused on delivering high-quality products. Many companies in India that are focused on quality ensure that they use quality equipment, standard measurement tools, and machines to manufacture your products.

India has been an industrial center in Western Asia for approximately 200 years. Along with manufacturing, India has also proved itself to be a lead innovator thus, promising to be an impressive industrial hub.

Indian companies have an inherent level of transparency when it comes to delivering and manufacturing quality products. They ensure to communicate every detail regarding your project on a regular basis.

India has one of the largest democracies. Its business climate has been continuously improving which makes it a stable market for foreign investors and businesses. India today has achieved high macroeconomic stability and managed to become a technology innovation powerhouse.

Industries with Production in India

What is a Free Trade Agreement?

A Free Trade Agreement (FTA) is a type of arrangement between countries to remove trade barriers. FTAs primarily facilitate trade between countries. FTAs are synergistically beneficial as they provide various benefits to companies seeking to manufacture in foreign countries.

FTA agreements deal with the determination of the tariffs and duties that are imposed by the countries on imports thereby reducing trade barriers. FTA eases the exchange of goods and services across international borders with limited or no government tariffs, quotas, or subsidies.

Trade agreements could be bilateral, plurilateral, or multilateral.

Currently, India is part of 12 free trade agreements. These FTAs are listed below:

How can you get in contact with Indian Manufacturing Companies?

ExportersIndia: Another way to search for Indian manufacturers is by searching them over here. You can submit your query and expect a quick quote from the supplier within 24 hours.

Manufacturing facilities of some of the largest global companies are located in and operating from Pune. Pune caters to both domestic and export market requirements thus, it has attained a global manufacturing hub status. Let’s take a deeper look at some of the advantages that Pune offers:

Easy to travel to

Pune, Maharashtra’s second-largest city is located very proximally to India’s financial capital, Mumbai. It is approximately 94 miles / 150 kilometers away from Mumbai. Transportation here is easily available and if you choose to travel via road, you can reach Pune within 3 hours.

Pune is on the ‘Smart City’ Program

The Union ministry of Urban Development has chosen Pune to be developed as a smart city. Under this program, the city is fitted with smart solutions such as basic infrastructure, assured water and power supply, proper waste management, and an efficient public transport system. In addition, there is a system of e-Governance to improve the overall quality of life.

Pune has earned yet another nickname due to the large number of greenfield facilities that are set up near the city by companies such as Tata Motors. It is generally referred to as the ‘Detroit of India’ or the ‘auto-city’.

In addition, the Automotive Research Association of India is also based in Pune. This body is responsible for the certification of all vehicles available in India.

Pune is known to be also one of the major industrial hubs of India. The industrial township of Pimpri-Chinchwad is located just north of Pune city. It’s a major manufacturing hub and it houses over 4000 manufacturing units.

Pune has some of  India’s largest manufacturers and exporters of pumps such as Kirloskar Brothers Limited, Kirloskar Oil Engines, Tata Motors, Thermax, KSB, Cummins, and Hindustan Antibiotics have also set up operations in the outskirts of the city. The Serum Institute of India which is the world’s fifth largest vaccine producer by volume also has its manufacturing plant in Pune.

Pune has also attracted several foreign manufacturing firms. Pune is one of the largest hubs for German companies with over 225 established businesses. Some of these companies are  ThyssenKrupp, Foxconn, and Schindler and they have large-scale manufacturing units in Pune.

Pune has no dearth of IT industries. It has attracted a skilled labor pool which has created an impressive IT workforce. It is worth noting that almost all of the top IT companies in India have a presence in Pune, making it the second biggest software hub in the country, after Bangalore. Some of the largest IT companies such as Infosys, Cognizant, Wipro, Capgemini, and Tata Consultancy Services have their offices in Pune. It has become a great way of accessing IT talent for internet and software companies.

Pune is a hub for various industries such as automobiles, durable goods, and information technology (IT) for many Indian and foreign companies. Tata Motors was one of the first companies to set up their manufacturing facility in Pune and some of the prominent foreign manufacturers include German automakers Volkswagen and Mercedes-Benz, UK-based JCB, and US-founded GE and Cummins.

Pune is not only a major hub but also a beautiful, clean, and green city. It is an emerging metropolitan city which is why it attracts skilled labor from other cities. Not only does Pune provide a great lifestyle but it also provides employment and growth opportunities. Thus, a great labor pool makes it an excellent city for manufacturing industries. 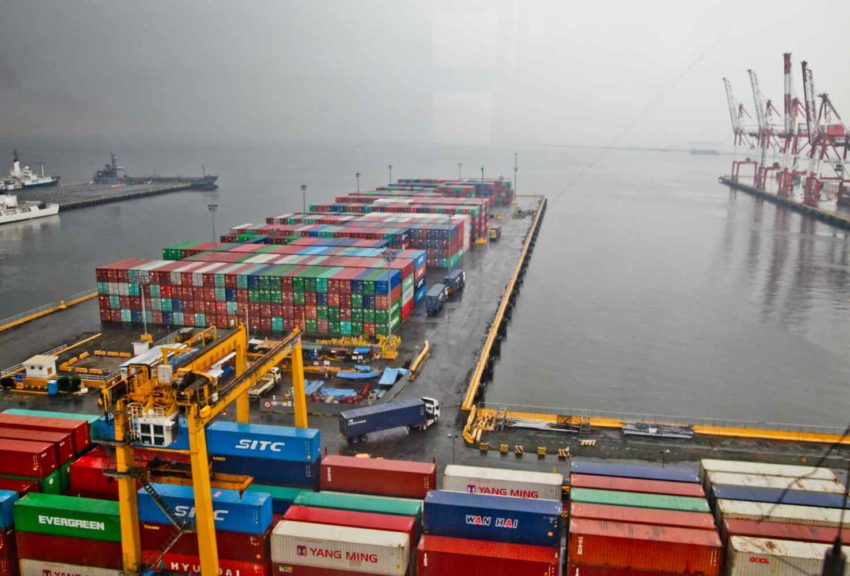 Pune is located near India’s largest container shipping port, Nhava Sheva. This shipping port is operated by the Jawaharlal Nehru Port Trust (JNPT) and is well connected to major national highways for pan-India distribution. In addition, Pune city also has three inland container depots, which facilitate the import-export of goods and raw materials. 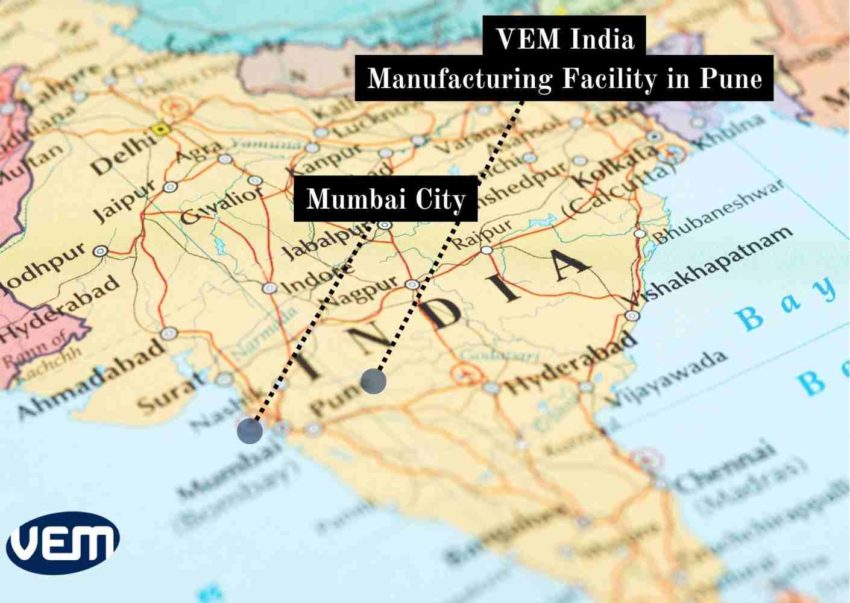 VEM Tooling India manufacturing facility is located in Pune, near Mumbai City. It is approximately 94 miles / 150 kilometers away from Mumbai so you can reach the facility via road within 3 hours.

VEM India has a team size of 50 people that includes designers and engineers, with vast experience in producing custom plastic parts.

VEM Tooling delivers great expertise in terms of mold manufacturing in India and injection molding. In addition, we currently have 10 injection machines at the Indian facility. VEM Tooling’s India manufacturing facility is an integral partner of many global manufacturers.

You can view more details about VEM Tooling’s India facility here and also, book a tour with us if you are in town.

We build all of our molds inhouse. Due to over 20 years of experience in building molds, there is barely a challenge that we are not up to. In cases of very complex molds, our mold making factilities in China and Bulgaria assist with machinery and niche expertise.

VEM Tooling is also introducing 3D steel printing in its facility. It is a single additive manufacturing technology and the main advantage of 3D steel printing is that plastic parts can be made without forging or machining thus, with DMLS and DMD technologies, very resistant parts can now be printed with a high-quality finish.

The primary goal of FTA is to promote business opportunities and boost the country’s GDP.  FTAs also provide various benefits to companies seeking to manufacture in foreign countries which is why it is synergistically beneficial.

Our plastic injection molding and tooling facility in India is dedicated to providing you with a great manufacturing experience and exemplary service.

Don’t hesitate and contact us to learn how you can benefit from manufacturing with us in Pune.